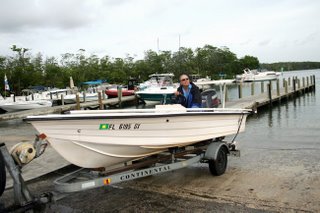 The last two Fridays have not been easy weather days. The first one was shattered by electric storms and squalls that had most bonefish skiffs trailered and on their way back up I-95 by mid-morning.

Yesterday, Friday number 2, was still blowing almost twenty miles an hour after four previous days where the onshore winds were gusting to thirty miles per hour. There was plenty of sunshine emerging, but the early low tide, slow current, and gusty winds were not favorable for the tarpon that I started scouting for on the open water shallow flats. I could have skipped back to the inland brackish rivers to stay after the fish I knew were still present, but the novelty was dying off with three prior successful trips.

Although it is obvious bonefishing is not WHAT or WHERE it used to be, the last few years have seemed to feature a good push of fish around Good Friday season. Generally, by that time the sun has gotten the water temperatures up enough and the cold fronts are more a wind experience than anything else. Whatever the case, I'll be watching and waiting....

Back in the Seventies... 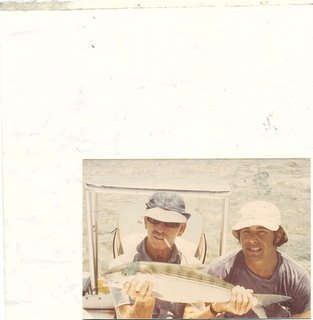 I happened upon this little treasure of a snapshot as a half-hidden artifact lodged in the roller track of a dusty photo drawer. It was faded, scratched andd gummy, yet I felt that I'd unearthed the Star of India.

Like an old song gone unheard for a long, long time, it unleashed a torrent of feelings, ideas, and companion images (each with their own qualities)- kind of like diving into an exponential recollection vortex.

I sat gazing at this image of Bill Curtis and I that was recorded in the summer of 1973. Most importantly, I remembered so much of that day, that year, and that era. It was a time when the flats boats in Biscayne Bay could be counted on one hand. No doubt, many of the light tackle personalities that grace the TV screens of the new millenium were children or adolesents playing ball in driveways or chasing grasshoppers for bait along a stream in some western state.

The angler in me was most interested in relishing the exact details and circumstances of this trophy bonefish that made us one hell of a trio. My historical muse got first dibs and would certainly relent, but not before noting our sideburns as well as the cigarette(s), the latter of which no longer belongs in our lives.

The memories unfolded... that day was one of the bright types of early summer experiences that featured loads of sun but the gusty northeast winds that high pressure off the Carolinas would bestow upon Florida. Although the water temperatures and overhead light were fine, the bonefish seemed scarce- until we got to the Featherbeds. As soon as Bill poled onto the southeast corner of that huge crescent, we saw bonefish cruising, mudding, and following rays. It felt downright delicious having the luxury pondering which of the fish we'd pursue.

Since I was never one for patience, I asked Bill to go for the fish following a ray only fifty feet
away from us in the twelve o' clock position. He pushed hard into the wind and in short order my shrimp landed between the ray's tail and three feet in front of the bonefish. I feathered the landing to minimize the plop and it quickly eased to the bottom in seconds. The fish gobbled it like there was no tomorrow. The first run almost spooled me, but Bill poled furiously in pursuit. I slowly regained line and my concerns eased a bit. Two more runs and ten minutes later, the fish was brought alongside the skiff, lifted aboard, and posed by two happy adventurers to create an image that would be rediscovered with such delight by a much older man far in the future.

I do recall that after we released that big boy, Bill mentioned there was a stretch of flat a hundred yards ahead that would likely have some permit casually cruising the edges in all this wind. I remember saying, " let's go for it." But that's another story, and I do have all those requisite snapshots... right here in my heart and my mind. 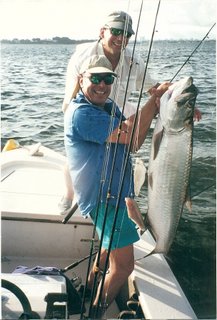 Springtime has definitely come to SOFLA and the tarpon push is on. The water in north and south Biscayne Bay has edged into the seventies- at least for now. March in Miami does feature cold fronts, but they are more of wind event versus a temperature-dropping event.

One of the reasons my stories and reports have waned during the last few weeks is in fact, my near-rabid pursuit of the silver kings. I've been fortunate enough to have landed three fish from 80 to 120 pounds in as many weeks. They were caught on either 10 or 12-pound class tackle. The baits for these gamesters were determined by how and where they were feeding- a white bucktail tipped with shrimp, a live shrimp, or in the case above, strips of kingfish bellies.

As to the possibly indiscrete and unfashionable nature of my hero pose, some comments are in order. It would have been hard to pose the fish in the water unless I grew 12-foot legs. In addition, the most recently-recommended guidelines of the horizontal double-handed under-gripped pose is often a mistake. Anyone who has tried this on a big tarpon ought to admit that a ton of protective slime was lost as well as the possibility of some scales as well. Maybe the fish was even dropped on the deck. Big tarpon simply cannot be posed like the small fish of the Yucatan peninsula. As for the concerns of the viscera-displacing damage of the vertical pose, I seriously doubt a three second event could accomplish this. This tarpon shot off like an oiled banshee when I released it. I never touch any gills, but get a grip AROUND the cheek and throat tissue; and the remaining two fingers are placed under the gill plate. I brace my wrist, as 80 pounds is a big load for that thin connection between hand and arm. I noticed that this tarpon seemed far more well-constructed than people.

Some words are in order about tarpon size and the angler's experience. If you are told small tarpon up to twenty pounds do the same things as big tarpon, you'd better reconsider that remark thoroughly. Fighting a big tarpon is an epic experience that is totally different than battling a small fish. You often wind up releasing your fish very far away from where you hooked it. The 100-pounder I released today was hooked off the north Coconut Grove and released 1 mile south of downtown Miami- this battle was spread over two miles! This fish was caught on 12-pound tackle. If the same tackle were employed catching a 15-pound tarpon in a creek on Tamiami Trail, Grand Cayman, or Chetumal Bay, it's likely the angler would not even have to move, much less the skiff- if there was one! Going to 6 or 8-pound class tackle (whether it's fly, plug. or spin) spices up the battle. Nevertheless, battling a 100-pound tarpon is not the same experience as catching the same species weighing 10 or 15 pounds.