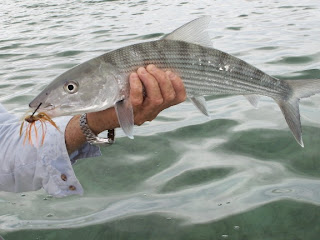 AS SEEN IN THE MARCH/APRIL '07 ISSUE of Florida Sport Fishing Magazine
As we poled around the corner of a creek, we came upon a triangular sand flat bordered by two channels that ran out to sea. The skiff eased along, and Art Blank spotted tailing bonefish 50 feet away in the “three o’clock” position. Simultaneously, I spotted a pair of huge bar jacks slowly swimming away from us dead ahead. After checking with the guide about the hardness of the flat, Art slipped overboard into two feet of water to stalk the bones. I repositioned to the bow of the skiff as the guide poled hard in pursuit of the hefty jacks.

When the distance closed, I fired my yellow bucktail alongside an orange patch right in front of the moving targets. One of the fish swerved toward the lure then spooked out to sea. Disappointed, I slowly reeled in until I realized the orange patch was rising up from the bottom towards my lure. It was a hunting pack of large mutton snapper - all in pursuit of my baby Spro! I slowed the jig, twitched it twice, and my rod doubled over as one of the colorful bottom dwellers inhaled my artificial. After a seesaw battle of twenty minutes, I slowly eased the fifteen pound mutton alongside the skiff. In the midst of this light tackle triumph, I blurted to the guide that I had never had a shallow water experience quite like this one. He looked up, smiled and said, “Welcome to Deadman’s Cay, mon.”
Deadman’s Cay lies inside Long Island’s “fertile crescent.” Located in the island’s west central region, this area boasts one of the Bahamas’ richest and most intricate angling ecosystems. This tapestry of light-tackle opportunities runs from shallow shorelines to outside flats and drop-offs and is composed of vast plateaus, salt ponds, islands, creeks, channels and fish-filled blue holes.Fishing the inshore waters of Deadman’s Cay conjures up comparisons with the Lazy Susan. This delightful device - if you don’t know it - is a circular spinning serving item composed of many segments for different foods. Rather than chance a long reach across the table, you spin the Lazy Susan for the dish you would like in front of you. This is the kind of fishing you’ll find at this destination: varied, plentiful, pleasing and close-at-hand.

I’d chosen to fish with legendary Bahamian guide Samuel Knowles. His reputation was stellar and the conversations we’d had while setting up the trip indicated how proficient and considerate he was. His well-run fishing operation is called Samuel Knowles Bonefish Adventures. In addition to Sam, guides include Frank and Jerry Cartwright, as well as partner Wayde Smith. Wayde handles lodging at their beachside lodge, Smith-Wells. Sam’s claim that “we’d probably never see another boat all day,” turned out to be delightfully true and backed up my belief that Long Island provides an unpressured, truly Out Island experience.

The day for the trip arrived. My photographer, Art Blank, and I made excellent connections from Miami to Deadman’s Cay through Nassau; all the flights were on time and were seamlessly run. When we landed at Deadman’s Cay, Wayde Smith was there at the airport waiting for us. He helped load our bags and rod tubes into his van and off we went. Within ten minutes, we arrived at Smith-Wells. We settled into our room, which had a full range of amenities, including air conditioning and private bathroom. The refrigerator was full of breakfast and lunch foods such as cold cuts, bread, cheese, fruit, rum cake and plenty of ice-cold Kalik - this created quite a comfortable setting.We took a quick tour of the grounds before dusk.

Sam’s 16 ft. Rahming bonefish skiff lay at the water’s edge no more than a hundred feet from our room. The fact that Smith-Wells Lodge has Deadman’s Cay Sound as its backyard is a distinct advantage, something we were to find out the very next morning. As the sun set over Long Island, a local chef delivered our dinner. Sleep followed quickly, and dawn came in no time at all.

At 7:30 a.m., I heard Sam preparing his skiff and this jump-started us out of the door with rods, tackle and cameras in hand. Sam loaded the skiff carefully and fired up his engine. It took all of 30 seconds to ease through the channel before Sam had us up on plane. We’d been traveling no more than a minute when the skiff slowed and the engine cut out. I turned to see what sort of mechanical trouble was occurring and was pleased to see that Sam had killed the engine and was already mounting the poling platform. He told us to peak astern and we saw a patch of nervous water about 30 yards wide. Moments later, tails and fins popped up out of it, and we knew we were being poled towards a huge school of bonefish barely a half mile from the lodge! Moments later, both Art and I were hooked up to sizzling bonefish that made the drags of our reels sing sounds of joy.

For the first two hours, we were able to stay with the school by watching for tails and wakes. After that, the wind came up and the sky clouded over. Although our first concern was that the fish would stop feeding, we were pleased to see that they started mudding. Oftentimes, the muds would be a hundred yards long! We switched to soft-plastic jigs on plug and spin gear and stayed connected throughout the day. Most of the bonefish ranged in size from two to four pounds, with six pounds being the largest. The first day of fishing resulted in 60 of the more than 100 bonefish releases we would accumulate over the next three days. This sort of non-stop action was obviously what all the buzz was about.

For the second day of fishing, we asked Sam to hook us up with as much variety as possible. More than willing to oblige, he told us we’d be headed for the outside flats, channels and cuts that abutted the open ocean. Since we were sampling this area in June, our good timing allowed us to have numerous shots at larger reef fish that wandered inshore during early summer.These outside flats featured combinations of fish we would not have thought possible. Our first contact began in a creek dropoff where we spotted a huge school of mangrove snapper, mojarra and bonefish all nonchalantly swimming together. It was a tossup which of the species would grab our shrimp and splitshot offerings.

Further down the creek, we cast yellow jigs at surface-swimming bar jack and horseye jack that produced hard fighting fish to eight pounds. This excitement lasted the better part of the day, and peaked when we rounded another bend that featured the hunting pack of mutton snapper that began this story. It was another day of non-stop action that left Art, Sam and me deeply gratified.

The third day was windy and a bit rainy, which discouraged a trip back to the outside flats. We were hankering for more variety and told Sam. He responded that he had a blue hole barely a mile from the Lodge that would give us the excitement and adventure we were looking for. The one thing he insisted on was bringing some pilchards - the preferred bait for larger shallow water predators.The blue hole lay at the convergence of two channels that dropped to nearly 20 feet deep. One of the channels had a hard rock wall on one side that went straight down, while the rest of the boundaries were sharp sloping grassflats. As we staked uptide of the channel juncture, a big school of tarpon rolled in front of us. We immediately cast baits and lures, but we were unable to interest the silver kings because houndfish - some as long as four feet - inhaled every offering. These strange looking creatures fought like juvenile sailfish.

After we caught about a dozen, we tired of this action and asked Sam to relocate.He cranked up the engine and idled close to the rock wall. After deploying the anchor line, the skiff came tight just a short cast from the rocks. He rigged two spinning outfits that were loaded with “8/30” microbraid line with a small sinker above a 2/0 hook on a three foot 30 lb. fluorocarbon leader. We baited with pilchards. As soon as the baits hit bottom, there were immediate strikes. Art and I fought the fish on maximum drag settings to avoid cutoffs. We both won brief battles as I boated a colorful Nassau and Art a chunky mangrove. After an hour of nonstop action with jacks, snapper and grouper, we were out of bait. We were happy to call it quits and reflect back on all of the incredible action we experienced – this was Bahamas shallow water fishing at its best!

Smith-Wells Lodge is designed to provide accommodations to six anglers maximum - this keeps the quality of the fishing very high because of the low number of individuals plying the area on any given day.The rooms are furnished in a simple décor that traveling anglers enjoy, yet each room features all the amenities that fulfill the full range of needs. This includes air conditioning, cable television, telephones, microwave and a fully stocked fridge. The layout of the room has a sitting area, kitchenette and two separate bedrooms with large ceiling fans.The meals at Smith-Wells are formatted for guest preparation of breakfast and snacks. Besides the aforementioned delights, refrigerators are stuffed with eggs, ham, bacon, waffles, milk and plenty of cereal. The guides take your lunch order and have the food tucked away in an ice chest as you board your skiff for the day’s outing. Sam and Wayde have a local chef deliver dinner. We dined on fresh grouper, conch, steak, and chicken entrees, which are generally served with the customary local accompaniments of rice and beans, coleslaw and freshly baked Bahamian bread. One evening, Sam surprised us with a pre-dinner snack of fried mutton snapper cheeks which were delectable! Guests top off their meals with a healthy slice of rum cake and ice-cold Kaliks.

The mission of Samuel Knowles Bonefish Adventures is to provide a limited number of clients year-round flats and inshore fishing that is nothing short of prolific, led by expert guides capable of catering to all levels of angling skill - from beginners to experts. Wayde Smith was proud to point out that they even have an angler who is bound to a wheelchair who regularly visits to cash in on the area’s angling treasures. Sam and his guides have a policy of not leaving fish action; safety, not a wristwatch, determines when they head back to the lodge.

Because Deadman’s Cay offers such a rich, diverse habitat, Sam can offer inshore anglers consistent action during most any kind of weather. Towards that end, Smith-Wells is open for business from August through June, with a little vacation time for the guides in July. Basically, there are three zones Sam and his guides fish - the inside flats (which are behind the Lodge), the transitional flats and channels (15 minutes away) and the outside flats (another 20 minutes away). Again, in this wide swath of habitat, you’ll find bonefish, barracuda, sharks, tarpon, permit, mutton snapper, mangrove snapper, huge grunts, yellowtail, enormous houndfish, grouper and multiple species of jack.

All three guides fish identical Rahming skiffs powered by 85 H.P. Yamaha outboards. These proven fish-catching boats safely and efficiently handle the full range of shallow flats to open wavy waters with grace. Whatever your preferred type of tackle, it is welcome onboard, since these guides are devoted to making sure you have a wonderful experience.