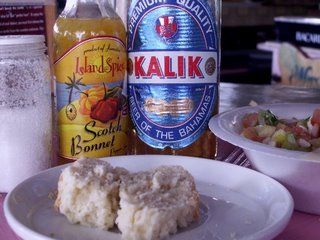 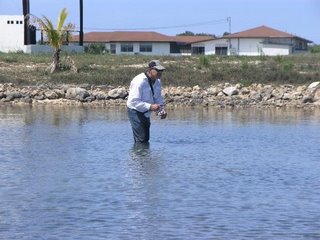 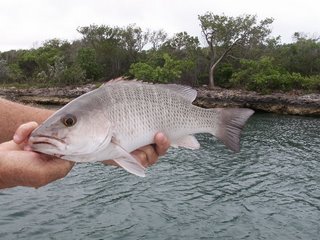 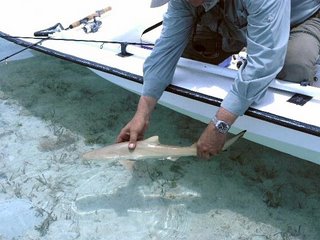 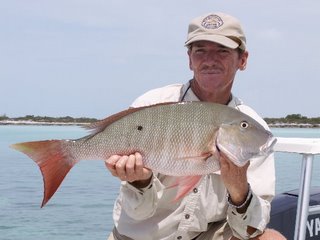 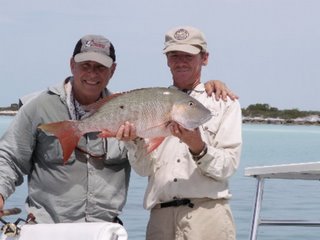 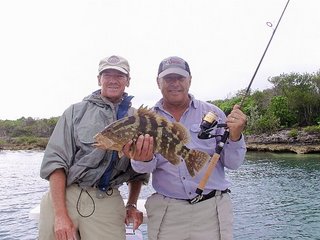 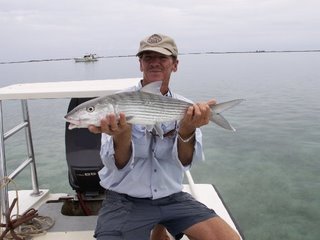 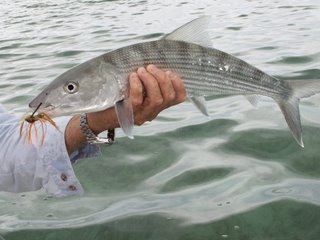 It's good to savor last summer's images of Deadman's Cay. Like a cup of hot cocoa by a fireplace or a radio tune that cascades sweet recollections, Art Blank's images of this trip nourish this angler's soul as I hope they do for you. The guide who made all this magic happen is Samuel Knowles of Samuel Knowles Bonefish Adventures (www.deadmansbones.com).

A Rainbow of Sweetness Arcs the Day...

Do you remember those giant lollipops that lasted all day? Or maybe the giant sourballs grandma brought for you when she visited? With a swirl of your tongue against the candy or your cheek and palette, those bold confectionaries filled your mouth with a kind of never-ending flavor that was positively satisfying. This morning's fishing has created the same effect on my mind and angler's soul.

As to the source of such continued sweetness, the Willie Wonka factory was a river in western Fort Lauderdale. I journeyed there to anticipate the inshore movements of tarpon towards the warmer backbays during an unfolding cold front. As the sun rose, the sight of countless tarpon rolling was truly a mouth-watering excitement.

During the next three hours, all I had was one take-but that's all it took for a glory morning. As I struck the fish on ten-pound tackle, the line rose up in the water column and culminated in a huge fish of over a hundred pounds almost clearing the surface. I was cautious in the battle and an hour later -after all kinds of tarpon tactics- the fish was alongside for release. Some quick measurements and computations put the fish closer to one hundred-twenty pounds: a " Twelve-Times Fish."


As the sun sets today on what is sure to be a cold night, the flavorful images stay strong and sweet.

This brand new book is devoted to those anglers that love a mix of fishing and travel. I've been to all the destinations and lodges described in this volume. Some of those places include Alaska, Mexico, Antigua, the Florida Keys, The Sanibel to Marco Island Coast, The Bahamas, Little Cayman, the Canadian Maritimes, British Columbia, and Roatan, Bay Islands of Honduras.

Along with pieces on techniques and tackle, the book is sure to prove informative and useful.

Although I'm staunchly committed to traditional publishing, I've tossed my hat into the digitalized, print-on-demand publication of books. Towards that end, "Fishing Tips, Tales, and Travels" is not only available as a softcover volume- it is also available as an "e-book."


Purchasing this book is easy. Go to www.amazon.com . Put Jan Maizler in the search field and it will take you to my books- this new volume is one of them. 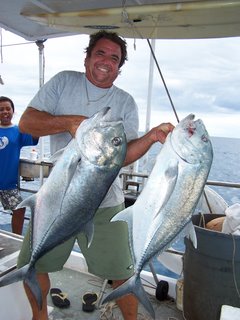 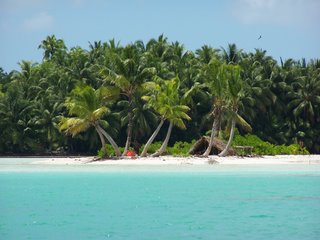 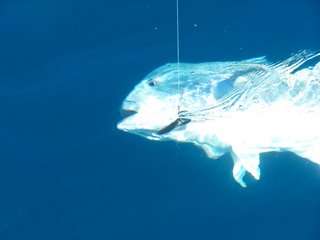 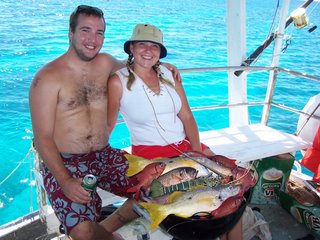 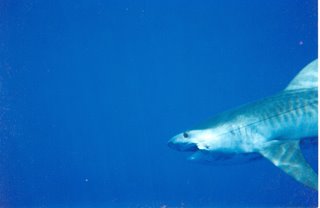 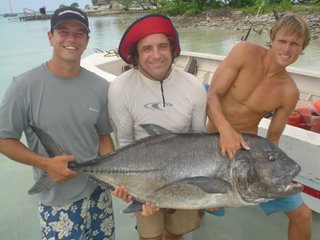 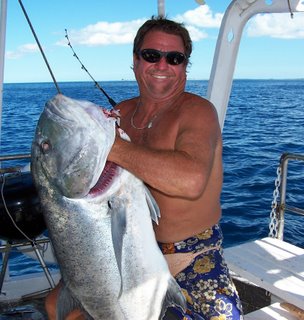 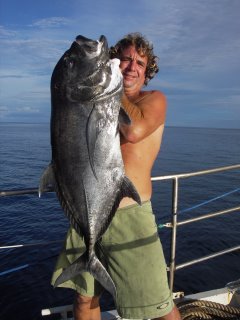 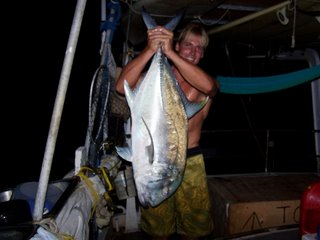 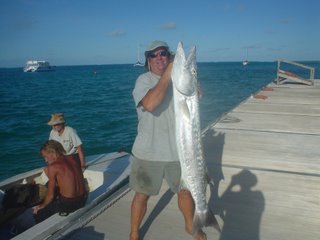 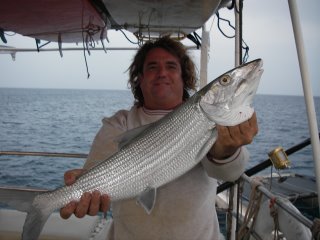 I am pleased to be a part of the evolution and birth of one of the most exciting new destination-fisheries in the world. It is sure to take its place as one of the brightest stars in the sky of first class light tackle and flyfishing operations. In addition, there will be many wonderful activities for non-angling family members and friends. Stay tuned for further announcements of a very happy arrival.

Jan Maizler
www.flatsfishingonline.com
Posted by Jan at 11:53 AM No comments:

The weather got fair on Thursday and was expected to remain that way over the weekend. For me, this meant doing some fishing on Friday and Saturday.

The first day was devoted to South Biscayne Bay and whatever that body of water would yield up. It was clear that the chilly remains of prior fronts were operating via cool water temperatures and light northwest winds. Not surprisingly, the tarpon were scarce in that area. Tides were low and current was minimal, which added two more negative factors in gamefishing these shallows. I opted for jigging the channels and caught some large ladyfish and modest-sized jacks during the last part of the outgoing tide.

As the tide swung in, I headed towards the oceanside flats. By mid-morning, my electronics indicated that the water temperatures had risen from 70 to 74 degrees. I put out a bit of chum and within a minute had a large form come tracking in. I made a good cast and hooked up, all the while wondering if the chunky shape I saw on arrival didn't mean a big boxfish. After a long run and three-minute battle, that impression was confirmed as I brought the fish alongside. The boxfish easily weighed eight pounds, which was large for that species. In the next two hours, I had three pods of bonefish in (and out) of the chum- all of which were skittish in the cold "still" water.

Back at the boat ramp, I spoke with Captain Ken Collette, who reported similar bonefish activity. He also said that while there were scads of tarpon off the beaches of Miami Beach as well as Government Cut, the fish were not eating.We both concluded that warmer water, more current, and perhaps a southeast breeze would do the trick.

On Saturday, the plans were to complete a story on Captain Greg Poland that also featured the Cheeca Lodge. It was clear that the Weather Gods were smiling, so the drive from Miami to Islamorada was a slam-dunk in the wee hours under starry skies a few hours before dawn. I'd brought my friend Jim Porter with me. We'd be meeting photographer Pat Ford in front of Greg's house to rendezvous around his twenty seven-foot Conch. Greg's friend, Brigette, rounded out the group.

While all the specifics of this experience belong to another story, our party caught yellowtails, kingfish, grouper, big blue runners, and amberjacks. I was gratified that there was ample story material. Later that day, Jim, Pat and I had lunch at the Fish House in Key Largo. This was a first for me, and I found the seafood entirely satisfying.

On the drive back to oh-so-placid Miami, I kept asking myself where I might plop myself on Sunday to make the doubled-up fishing triple. 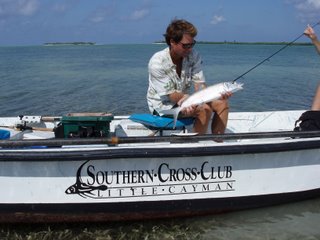 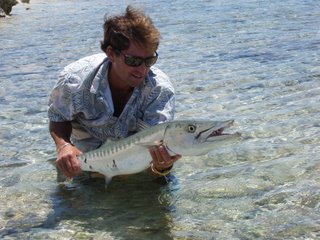 These images record just a few of the magic moments of fishing Little Cayman Island with guide Buck Buchenroth. The destination we fished out of was the venerable Southern Cross Club (www.southerncrossclub.com). I wish I was there right now!