Probably the last cold front of this Spring went through SOFLA last night, plummeting temeratures into the seventies-such pretense, these spring fronts!. This was a much calmer and hotter month than April of last year. Fishing is so cyclical, with the downtown Rickenbacker tarpon a mere shadow of last year's presence. However the bonefish, big ladyfish, and spotted seatrout have gone Mongo Bozo, as Tim Borski puts it: I love the phrase and reserve it for times of great action. Tim generally uses that wording for a very big bonefish. In either event, a morning of three bonefish, 14 big ladies, 9 trout, and 2 spanish mackeral is a fine time indeed! 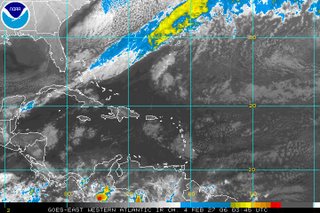 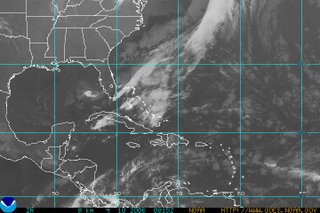 The NOAA color satellite image shows a cold front of a month or two ago streaming down as far southwest as Ascension Bay in Quintana Roo state. The reports I've reviewed for the winter months as filed in The Angling Report indicate that the Yucatan was pretty "weather effected" throughout the winter and the flats fishing was far from optimal.

This bears out my oft-repeated advice that the only real Caribbean winter flats destinations with stability are Bonaire and Los Roques. Other reports I'm getting indicate that the latter destination is becoming polluted with the threat of increasing hostility between the government of President Chavez of Venezuela and the USA- recently, Chavez called for the formation of a People's Army against the threat of a U.S. invasion. Although you may hear that it is fine to go to Los Roques, watch the unfolding tensions very carefully as well as avoid the criminality that exists in Caracas, the fly-in hub for Los Roques. My advice is opt for the exquisite waters of Dutch-influenced Bonaire to the west of Los Roques next winter if Venezuelan political tensions worsen or if you and your family want a safe, responsible, and politically untainted island with lots of bonefish.

The second NOAA black and white satellite image shows an April 10 front, which has the markings of a milder, less deep-reaching weather event. These spring fronts have more wind shift implications as opposed to temperature drop considerations. Look for the Bahamas, Keys, Caymans, and the entire Yucatan peninsula to start picking up quite nicely on the flats as spring unfolds.

A Good Friday for Seatrout

Spring has fallen into the bright and breezy invigoration- maker Floridians blessedly know it can be. Though three days of high winds were messing up the bonefish flats, the water temperatures held up and I knew North Biscayne Bay would be rough, but the water would still be reasonably clear. After using flies and artificials with modest success, it was time to take out the big guns: Bass Pro Gold Cup Inshore spinning outfits spooled with 10 pound mono and a 2/0 TruTurn saltwater hook.

I caught 20 pinfish on hairhooks and shrimp. I got four fillets out of each baitfish and drifted the pinfish strips across the grassy flats in the heavy breeze. Two hours later, I'd released over fifteen seatrout, with the biggest fish topping four pounds. Seatrout lovers should realize these pugnacious beauties are a sucker for a well-presented finfish bait, probably more than any other offering. I avoid microbraid lines with seatrout because i feel it is too unforgiving with this specie's soft mouth.

Here's another hook I've been field testing going into my fourth year. I'd have to say that this is my work hook, and I have caught practically every Florida inshore species on the 711. This model hook is a superb value that not only has its Cam action hookup, but its carbon steel composition enables it to be sharpened to an awesome degree. The TruTurn hook is an extremely usable and easy-to-master "J-style hook." A few packs of these hooks are always in my tackle box..
Jan Maizler
www.flatsfishingonline.com/
Posted by Jan at 11:36 AM No comments:


This particular lure has gone into its fifth year of usage on my skiff as well as in wade trips around Florida, the Caribbean, and Central America. This has been the most productive lure I have ever used on beachflat snook in a sightcasting situation. Its life-like action is excellent and the hook point and placement keep it more snagproof than many lures. The upriding hook makes it a great lure to sight cast to pothole snook on the grassy flats of the Florida Bay backcountry. I try to use the color TerrorEyz that I think matches the forage snook might be feeding on. My favorite color features silver/pearly sides and a black back, which most effectively simulates "whitebait" like pilchards.

Jan Maizler
www.flatsfishingonline.com/
Posted by Jan at 12:37 AM No comments: 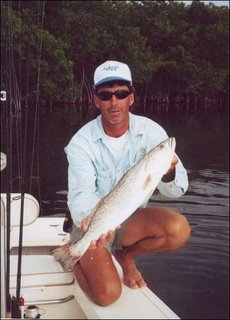 The approach of a front towards southwest Florida was well managed by Captain Tadd VanDemark of Sneak Attack Charters ( www.sneakattackcharters.com/) as he and I planned a seatrout safari today. Armed with his superb knowledge, tackle, Ranger Cayman 223 skiff and an awesome weather sense, Tadd gave us a morning of nonstop seatrout action, and had us flying back across Florida Bay by midday before the front hit! We certainly lost count of the seatrout we caught and released, yet easily many of the fish were pushing three pounds. Captain Tadd is the kind of guide who makes fishing a pleasure- all anglers from neophytes to experts are welcomed. I'll be writing about this experience at length in the future.

While I'd thought that the heat would pull tarpon to the South Bay flats and channels, it seems a bit early. The rising temperatures sure put the bones in a feeding mood, and I released three fish to 10 pounds by 8 a.m. Good bonefishermen pay as much attention to bottom contours and sufficient current as they do to time and height of the tide on a flat.
Jan
Posted by Jan at 1:25 PM No comments:

It goes to show you that in Islamorada, big bonefish are stand-alone big !!!
Thanks to www.fla-keys.com/ !!!

Robert Collins of Naples, Fla., won grand champion honors at the 2006 Islamorada All-Tackle Spring Bonefish Tournament. He released two weight fish (over eight pounds) on the first day of fishing, building a lead that held over the next two days.Collins' two bonefish weighed 13.8 and 9.13 pounds, earning 1,888.5 points in the tournament's ascending bonus scoring system, where bigger fish earn comparatively bigger bonuses. He was guided by Captain Paul Tejera of Islamorada.Collins earned an invitation to the Rolex/IGFA Inshore Championship, to be held in spring 2007. He won the 2005 Rolex/IGFA and is expected to defend his championship in the 2006 tournament slated for July 9-12 in Islamorada.Fishing with bait, Collins also won the general tackle division and the largest bonefish prize.

Second place in the overall competition went to Jim Mooney of Islamorada. Fishing with Captain Greg Poland, also of Islamorada, Mooney scored 1,704 points with one weight fish caught on each of the last two days of fishing. His fish weighed 12.5 and 10.13 pounds.Third place went to Tim Rahn, guided by Captain Bruce Stagg, both of Islamorada. Rahn had two weight fish plus five releases (fish over 18 inches in length) to total 1,500 points.The fly division went to Richard Oliver of Kennebunk, Maine, fishing with Captain Billy Dahlberg of Islamorada. Oliver released one qualifying bonefish, weighing 8.2 pounds, for the win.

There was no winner in the all-tackle division.Twenty-two anglers scored 15 weight fish and 38 releases over the three days of fishing in windy conditions.

Flatsfishingonline will be featuring extended hurricane season coverage from June to November inclusive. The secret of the angling and boating worlds of the Atlantic Tropical Basin in dealing with these storms lies in accepting the worsening storm cycle we are in-regardless of the cause. The most important posture is planning and preparation.